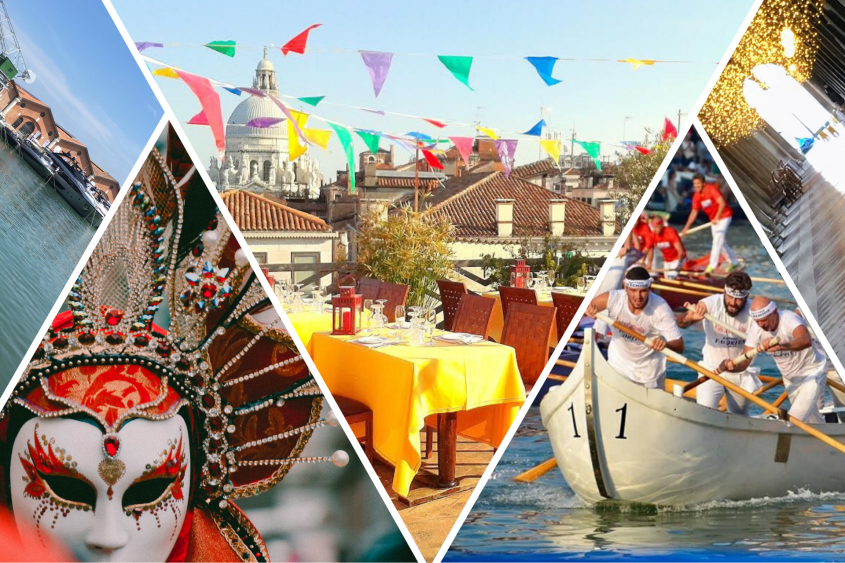 Venice is a unique and magical city. Each glimpse turns  into a panorama to be imprinted in your mind and, why not, also into an image to post on social networks.
When is the best time to visit the city?
Each season has its charm and shows a different city: light, temperature, turnout differ from month to month but make every stay exciting.

Here are the unmissable events in Venice in 2020:

Carnival is one of the most important events, renowned all over the world. Masks and colors enliven streets, squares and palaces. Exclusive and masked parties are organized during this period. Piazza San Marco hosts the most traditional events such as the Flight of the Angel from the San Marco Tower Bell and the Festa delle Marie.

Easter is the most popular Catholic religious holiday in Italy which is celebrated here with the classic chocolate egg and the “Colomba” cake. Symbol of rebirth, it very often coincides with the beginning of Spring, the season in which Venice blooms and the temperatures are more pleasant, an excellent time to take a break from everyday life.

On April 25th Italy celebrates the liberation from the fascist government thanks to the American allies. Venice also celebrates San Marco, patron of the city. Following the tradition, on this day every lover has to give his beloved a red rosebud, in Venetian bòcolo

A weekend dedicated to Venetian traditions where the ancient splendor of the Serenissima Republic lives again. On Sunday, the water procession and the ceremony of the wedding of Venice with the sea take place, the most popular and characteristic events of the Festa della Sensa.

The Redentore Festival is one of the most traditional Venetians events. We celebrate it every third Saturday of July and it commemorates the liberation of the city from the plague. The most awaited event is the fireworks display in the San Marco Basin, in front of the Basilica of the Madonna della Salute. The people gain their place on the shores facing the basin since the early afternoon. The lucky ones enjoy the show from privileged locations: first of all the boats and then the terraces.

As every year we arrange a delicious dinner on our rooftop terrace signed by  La Caravella Restaurant with a direct view of the Basilica della Salute, an exclusive location that allows you to comfortably admire the highest  fireworks.

Meeting point for Italian and international VIPs, the Venice Film Festival takes place on the island Lido of Venice and offers competitions, exhibitions and events here and in other places in the city.

Among the many events there is also the International Critics' Week where the Mario Serandrei - Hotel Saturnia & International Award for Best Technical Contribution is awarded.

The historical regatta is one of the most spectacular events of the Venetian tradition. Historic boats with costumed figures parade through the Grand Canal and several regattas take place.
In 2019 we sponsored the CAORLINA BIANCA, a traditional rowing boat, whose crew was composed by six male rowers. Also the 5th generation of the Serandrei family (respectively 9 and 8 years old) took part to the event.

Venice Marathon is one of the most spectacular marathons in the world. The athletes, after running along the Riviera del Brenta, cross Marghera and Mestre and reach the historic center of Venice where they run over 14 small bridges and along Piazza San Marco. Arrival is at the Giardini.
The VM10Km is also becoming increasingly popular, a ten kilometer stretch on the final part of the marathon route, from San Giuliano to the Giardini.

Every year on November 21st Venetians celebrate the feast of the Madonna della Salute. An ancient tradition, which recalls the thanks of the entire city to the Virgin Mary for the end of a terrible plague between 1630-31.

To facilitate the pilgrimage to the Basilica of the Madonna della Salute, a temporary bridge is built on boats on the Grand Canal and in the square in front of the Basilica stalls are set up with confectionery and other objects.

The Christmas holidays add charm to our already magical city. The lights adorn the most crowded calli and Piazza San Marco shines more than ever. Usually the municipality organizes a series of events in various places in the city, including an ice skating rink in Campo San Polo.

To add a touch of taste and originality, we recommend the Christmas or New Year's Eve dinner or lunch at La Caravella Restaurant.