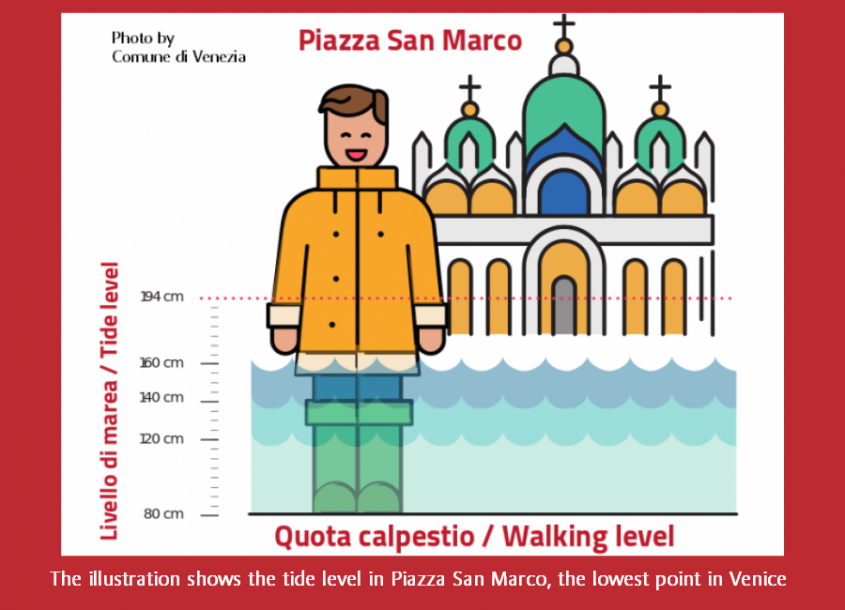 Venice is a unique city, entirely built on water, and for this reason it is interested, especially in the winter months, in the phenomenon called "high tide" with which Venetians have been dealing with for centuries.

How does the high tide work?

The phenomenon of high tide is influenced by the astronomical tide and the weather conditions, in particular by the Scirocco winds. Like all tides, the water rises for 6 hours and then in the following 6 hours decreases as nothing happened.

On days when high tide is expected, the water enters the lagoon and raises the level of the canals. The height of the tide is measured in reference to the sea level zero, which means that if we assume a tide of 100 cm above sea level the quantity of water present in the calli (Venetian streets) will be only a few centimeters. In fact, 97% of Venice is located about 100 cm above the mid-sea level, and Piazza San Marco, one of the lowest points in the city  is always flooded. The other squares and streets, instead, will undergo possible flooding depending on the tidal peak reached. Once it reaches its maximum, the tide will begin to flow and the city to regain possession of itself.

As mentioned, the Venetians, used to this phenomenon, await the flow of water and then begin to clean up and resume their normal activities.

The tide center of the Municipality of Venice carries out constant monitoring, promptly informing citizens with sound signals in case of high tide. Furthermore, if the phenomenon persists continuously for 3-4 hours, Venice is still walkable thanks to raised pedestrian passerella, positioned at strategic points with the highest turnout.

On November 12th there was an exceptional high tide, due to very unfavorable weather conditions for the city, with gusts of wind reaching 100 km / h. The peak reached 187 cm, the second highest high tide in the last 50 years. As mentioned, it was an exceptional episode and some parts of the city were more involved than others; but thanks to the hard work of our staff, we limited the damage and remained operational anyway and at any time.

Our Hotel is located in Calle Larga XXII Marzo, an area close to Piazza San Marco but at the same time fortunately less affected by the phenomena of high tide, as it is slightly elevated compared to the Marcian area.

Our reception is involved in this event only when the peak reaches at least 125 cm, a tide level defined as "very sustained" which does not occur so frequently.